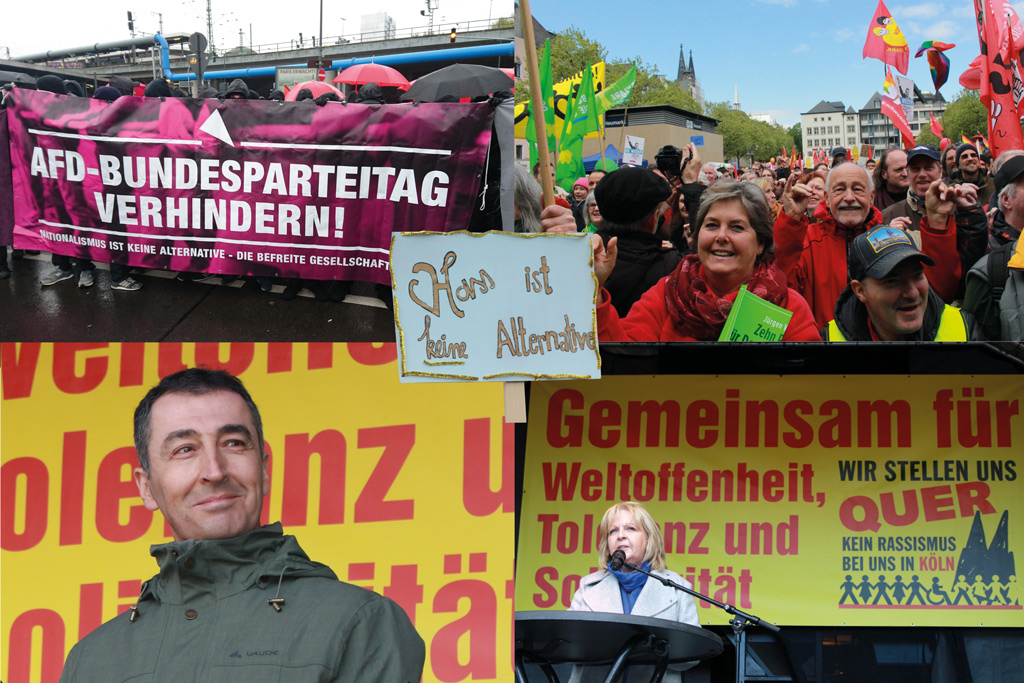 The right-wing AfD is currently facing a lot of problems: Immigration and internal security are not the hot topics they were last year and an internal power struggle around Frauke Petry has divided and shaken the party. All that is reflected in declining poll results.

Adding to those problems were leftist activists who tried to prevent AfD-delegates from talking about policy and personnel decisions by trying to prevent them from reaching the hotel in the first place. On Saturday morning, between 7 and 9 a.m., the :bsz joined roughly 150 activists at one of several road blocks set up near the train station Cologne Deutz. Among other things, they chanted “Brick by brick, wall by wall, let the fortress Europe fall!”. While members of the militant Antifa-organisation refused to be interviewed, we managed to talk to Jens Jaschik, spokesperson of the moderate linksjugend [’solid] of NRW and student of history and philosophy at the RUB. He told us that he is “here today because he payed attention in history class” and thinks that it is important to show resistance.

Eventually, the delegates still managed to reach the convention under police protection. There was heavy police presence in downtown Cologne with a helicopter hovering over it the entire time. Over 4,000 police officers were on duty that day. But apart from two police officers being slightly injured everything remained peaceful.

We then moved to the Heumarkt square, the place where the biggest anti-AfD rally took place in proximity to the Maritim Hotel. Over 70 different organisations, among them religious groups, labor unions and political parties, had helped to arrange the event. The parties Die Grünen and Die Linke were the most visible with banners and balloons everywhere. Between 10,000 and 12,000 protesters reinforced the image of Cologne as a tolerant, colourful and cosmopolitan city with values opposite to what the AfD stands for. The atmosphere was reminiscent of a festival with concerts, speeches and protest marches through the city. Among those who talked to the people were Henriette Reker, the mayor of Cologne, Hannelore Kraft, the Minister President of NRW who is running for re-election in less than a month, and Cem Özdemir, chair of the Grünen.

The new NSDAP is dangerous

Jonathan Sieger, 28, member of Die Grünen in Cologne, considers it a “civic duty” for any democrat to make a statement against the AfD. In his opinion the AfD is “playing with fire” by “pushing the boundaries of what is socially acceptable” with their populist statements.

Thomas, 46, is also worried and thinks it is extremely important to stand up against racism: “To me, the AfD is the new NSDAP. I want to try to achieve what my grandparents couldn’t”.